In recent years, Radouan Mriziga has developed a remarkably coherent and rich oeuvre. In performances like 55 (Alkantara Festival 2016) and 3600, Mriziga investigates the relationship between dance, the act of building, and the origins of architecture and sculpture, connecting the moving body as measurement and maker to the expression of architectural drawings and constructions. Starting with the functionality of the body-performer and simple tasks, he searches for dance material in modern architecture and design principles, such as form following from function, and in art from Islamic cultures. From the later, he borrows a sense of mathematical precision, esthetic harmony, and symbolism, where the craftsperson who creates geometric patterns is artist, engineer, philosopher, designer, and performer of the golden ratio.

In 7, he adds a layer of mystery and imagination by evoking the Seven Wonders of the Ancient World. These feats of architecture and imagination, of which only the Great Pyramid of Giza still stands, mark the victory of humankind over its physical limits and the laws of nature. Each period has its wonders - impossible ideas that are somehow still built, each time higher and more impressive than what existed before. But how wonderful is the little human body that imagines and realizes all this greatness; how endlessly more mysterious and beautiful than those giants with which we surround ourselves. In 7, Mriziga puts the two scales side by side - that of the built world, made to impress, and that of the ultimate world wonder: the human body.

Don't miss Radouan Mriziga in conversation with Thomas Walgrave on May 26 at 18h (Meeting Point/Espaço Alkantara).

Bio&nsbp
Choreographer and dancer Radouan Mriziga (Morocco, 1985) studied dance in Marrakesh and Tunis. Early in his career he was mentored by Jacques Garros and Jean Mass. In 2012 he graduated from P.A.R.T.S, Anne Teresa De Keersmaeker's famous Brussels dance school. Soon after graduating he collaborated in different productions such as Half Elf Zomeravond with Bart Meuleman at Toneelhuis. He is one of the performers in Re:Zeituing, a project of the P.A.R.T.S Foundation and De Munt, in which a new generation of professional dancers rework the repertoire of De Keersmaeker. He also danced in Claire Croizé's Primative, People in a Field by Simon Tanguy and Becoming by Younes Khoukhou. In 2013 he started his own research as an artist in residence at Moussem Nomadic Art Centre, where he created his first solo, 55. A group piece, 3600, followed in 2016, and in 2017 he created7, the third part of the trilogy exploring the relationship between choreography, constructions, Islamic arts, craftsmanship, and architecture. The pieces portray humans as a balancing act between intellect, body, and spirit.
Credits&nsbp
Concept / Choreography Radouan Mriziga
Made and performed by Radouan Mriziga, Maïté Jeannolin, Zoltán Vakulya, Bruno Freire, Eleni-Ellada Damianou, Lana Schneider, Suhad Najm Abdullah
In collaboration with the visual artist Lana Schneider
Musician Suhad Najm Abdullah
Costumes Annabelle Locks
Dramaturgical advice Esther Severi
Artistic advice Alina Bilokon
Assistance Sara Chéu
Thanks to Jozef Wouters
Production Moussem Nomadic Arts Center
Distribution Something Great
Co-production Kaaitheater, Kunstenfestivaldesarts, Sharjah Art Foundation, C-Mine cultuurcentrum Genk, Vooruit, Pact Zollverein

With the support of DNA/ Culture Programme of the European Union 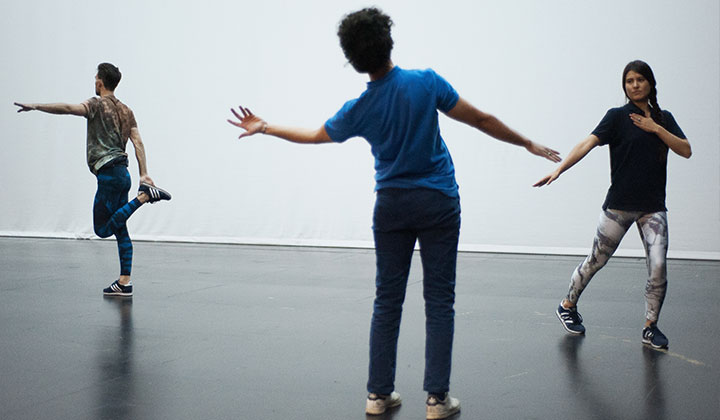 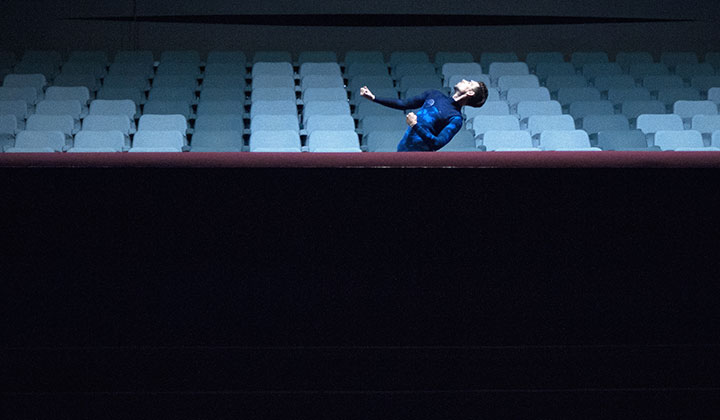