A horde of women dressed in black appear in silence, only to have their piercing cries and rhythmic movements make all notions of time and space disappear. The moving figures, heavy with the memory of the Isawa and Hmadcha rituals of Marrakesh, evoke both long nights of trance and a time in which madness had its place in society, as described in 9th and 12th century Persian literature. The experience is both universal and intimate, connecting performers and audience to each other and to an idea of origins. From the perspective of choreographer Bouchra Ouizguen, Corbeaux is not so much a performance but a "sound sculpture, raw and urgent, resounding infinitely." The sensation it provokes in its audience, of having been on a long journey, lingers far beyond the end of the performance.

Commissioned by the 2014 Marrakesh Biennale and performed outside the city's train station, the flock of Corbeaux has since landed in very different places, from prestigious arts institutions (like London's Tate Modern or Paris's Louvre) to public spaces in New York, São Paulo, and Beirut. Six years after presenting the magnetic Madame Plaza at the Alkantara Festival in 2012, Marrakesh-based choreographer Bouchra Ouizguen opens this year's festival with a version of Corbeaux created with local participants and presented at the historically and socially complex site of the Castelo de São Jorge.

Bio&nsbp
Bouchra Ouizguen is a Moroccan dancer and choreographer born in 1980 in Ouarzazate. She currently lives and works in Marrakesh where she has been committed to developing the local dance scene since 1998. Largely self-taught and an oriental dancer since the age of 16, she created her first experimental pieces such as Ana Ounta and Mort et moi inspired by her interests in cinema, literature, and music. She co-founded the Anania association in 2002 and worked namely with Mathilde Monnier, Bernardo Montet, Boris Charmatz, and Alain Buffard before founding her own company, O. Her concerns about society, visual arts, and popular arts in her country nourish her work. Multiple forms emerge from her work on sound, performance and video. In 2010 she received the New Choreographic Talent award from France's Society of Dramatic Authors and Composers (SACD) and the Jury's special award from the professional trade union of theater, music, and dance critics for her liberating Madame Plaza, where she shared the stage with three artists from the Aïta cabaret tradition. In 2011 she co-created the solo performance Voyage Cola with choreographer Alain Buffard for the Avignon Festival's "Sujets à Vif". In 2012, she created HA ! for Festival Montpellier Danse and performed it at Centre Georges Pompidou in Paris. This piece inspired the performance Corbeaux, presented for the first time at the Marrakech Biennal in 2014. In 2015, she presented Ottof at Festival Montpellier Danse and Festival d'Automne. In 2017, she created Jerada for the dancers of Carte Blanche, the Norwegian National Company of Contemporary Dance.
Credits&nsbp
Artistic director Bouchra Ouizguen
Performers Kabboura Aït Ben Hmad, Fatima El Hanna, Halima Sahmoud, Fatna Ibn El Khatyb, Khadija Amrhar, Zahra Bensllam, Malika Soukri, Hasnae El Ouarga, Milouda El Maataoui and local participants
Touring and administration Mylène Gaillon
Production Compagnie O
Coproduction Services de Coopération et d'Action Culturelle de l'Ambassade de France à Rabat
Support Institut français de Marrakech 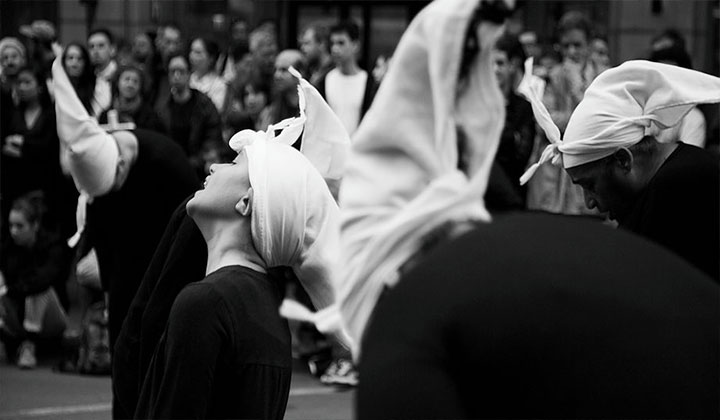